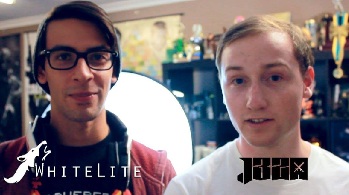 "Come on, Hubert, ya fatass cow."
"Shit isn't going our way. Is it ever going our way?"
— Whitelite, Skyblock Episode 3

Two college students, Whitelite (Alex Delfrate) and J3ZA (Jeremy Hearn), "who like playing games and having a laugh". As of October 11 2010, Two Awesome Gamers (TAG for short) started uploading LetsPlays of Minecraft and since then have garnered over one-hundred thousands subscribers. Though they are most known for their Minecraft Skyblock series, TAG has also recorded Crashtastic, Battlefield 3, Surgeon Simulator, Hack/Mine, SkyGrid, a Tekkit series, and a few modification showcases.

The channel is retired as of now, but their original Skyblock series is still considered a high point in the Minecraft Let's Play community.

TAG (and their videos) provides examples of: