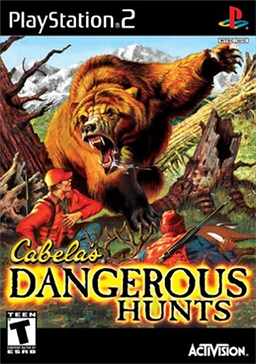 Cabela's Dangerous Hunts are a series of hunting-themed first person shooter games, developed originally for PC and consoles but later only for consoles (though Dangerous Hunts 2013 was ported to the PC). The game series consists of:
Advertisement:

Despite the Cabela's brand name, the games after the first are not actually hunting simulators, and after 2009 became pure arcade-style shooters. Essentially, they're Call of Duty, only the enemies are animals instead of humans. Two of the games in the series were developed to be playable with a light gun, and feature a combination of first-person shooter and on-rail light gun mechanics.

The games are notable for featuring a story mode with a relatively in-depth plot, usually involving the main protagonist losing a friend or family member to an Animal Nemesis, then traveling the world To Be a Master hunter, before finally confronting and killing the Animal Nemesis in the final level.

The games feature the following tropes: