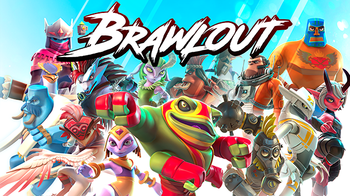 Brawlout is a video game developed and published by Angry Mob Games for Steam, Nintendo Switch, PlayStation 4 and Xbox One in 2017. It's a Platform Fighter with 24 characters and a gameplay system similar to the Super Smash Bros. series, also featuring characters hitting each other to reach higher percentages and trying to launch each other off the arena. The game also features many systems for advanced players such as wavedashing and teching, while still being accessible to beginners.