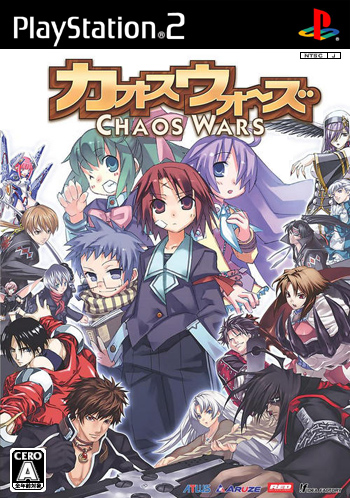 Should not be confused with Chaos War, a 2011 Marvel Comics Crisis Crossover.

There are lots of characters to choose from, and they all range from a variety of games:

The story opens with three Ordinary High School Students—the sourpuss Hyōma, the hyperactive Shizuku, and the cowardly Hayatemaru. They agreed to ditch school one day to investigate a strange cave that is said to hold mystical power. The story goes that if one prays there, his/her wish will be granted. However, when they reach said cave, something bizarre happens and they are sucked into a parallel dimension: a world called "Endia" ("the end of all worlds"). Endia is composed of a ring of islands, and oddly, has a sun that never sets. Hyōma is separated from his friends and encounters a purple-haired girl named Rin Sunroad. Rin is a "Gate Master"—she can operate special terminals that allow the transport of goods and even people. She tells him that he is a "Knight" (a person who is usually pulled from another world). Hyōma finds his friends early enough and must now gather an army of fellow Knights, and take part in a race to find the Keys, which may be the vital items that allows everyone to return to their own worlds—or even new Knights to join Hyōma's and Rin's cause.

Has a Spiritual Sequel of sorts in Cross Edge, another Massive Multiplayer Crossover involving Idea Factory with a Trapped in Another World premise. Zelos and Meu appear in both games.

The character sheet has been recently overhauled, but still needs to be heavily worked on. Any contributions will be appreciated.