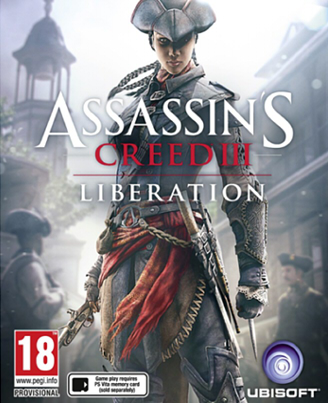 "Commit injustice in this world, and I'll send you to the next."
"I seek liberty and freedom, not for myself, but for those whom such fundamental rights are denied. I am their shield, their sword, their only hope. The roads I travel are dark, but they bring me closer to the light. I move unseen and strike when they least expect it. I am Aveline de Grandpré. I am an Assassin."
— Aveline de Grandpré
Advertisement:

The protagonist, Aveline de Grandpré, grew up in a privileged environment, being the child of a wealthy French aristocrat and his plaçee, an African slave. She was recruited into the Assassin Brotherhood shortly after her biological mother's disappearance, following which she was raised by her loving stepmother. At the age of 18, she discovers a complex slave trafficking operation orchestrated by a mysterious individual known only as the "Company Man" and vows to dismantle it, unknowingly starting a journey that will challenge her beliefs and test her loyalties.

Notably, her genetic memories are not relived by Desmond, because they have been synthesized into an entertainment product by Abstergo Industries. In making a game centered around Aveline's memories, they have changed or edited out various crucial scenes, so that Aveline appears to be a confused Assassin that eventually joins the Templars. Luckily, Erudito breached Abstergo's version upon release and hacked the truth back in, provided the players look for it.

Liberation brings with it many of the changes of Assassin's Creed III, most notably the traversal through more natural environments. Both games use nearly identical interfaces and movement schemes and are meant to complement one another. Furthermore both titles are set in roughly the same time period, in neighboring territories of the New World.

An HD re-release of the game (marketed as Assassin's Creed: Liberation HD) was announced in September 2013 for PlayStation 3, Xbox 360 and PC, via digital download, and released on January 14, 2014. It features additional missions, improved graphics, reworked sound and various other tweaks to bring the game closer to its console brethren in quality. A remastered version, along with a remaster of Assassins Creed III, was included in the season pass for Assassin's Creed: Odyssey, and got a standalone digital release in 2019.

The daughter of an French merchant and former African slave in New Orleans, Aveline lived a privileged life that others like her could not. Her outspoken nature and vocal opposition to slavery was only allowed due to her fatherÃ¢â¬â ¢s protection. She was recruited into the Assassin Order in 1759.

The daughter of an French merchant and former African slave in New Orleans, Aveline lived a privileged life that others like her could not. Her outspoken nature and vocal opposition to slavery was only allowed due to her fatherÃ¢â¬â ¢s protection. She was recruited into the Assassin Order in 1759.