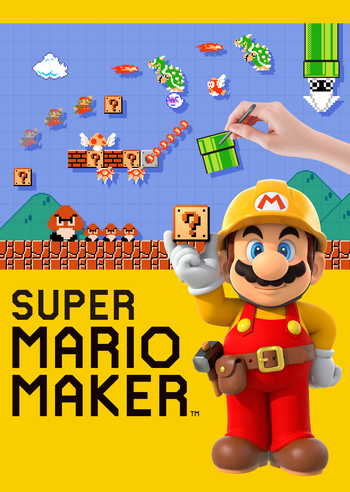 Anyone can make it. Everyone can play it.
Advertisement:

Super Mario Maker is Nintendo's 30th anniversary celebration of the Super Mario Bros. franchisenote That is, the release of Super Mario Bros., not Donkey Kong, a Game Maker engine for Wii U based around the 2D Mario platformers. The game provides an assortment of enemies, power-ups, and obstacles to make courses with, using an interface very reminiscent of Mario Paint. Players can combine things to create new objects, enemies, and courses that would give even Kaizo Mario World a run for its money. Above water big Bloopers with wings? That's one of the easier things to make. Mario in a giant stiletto with a Spiny helmet to match? Totally normal. Three giant Bowsers stacked on top of each other? Good luck.

People can also share the courses they make online with other players. Needless to say, quality of the courses made in this may vary. Courses need to be cleared before they can be uploaded, however, preventing Unwinnable by Design courses from cropping up.

One of the game's most promoted features is a Mystery Mushroom powerup: a mushroom that, when collected, will turn Mario into Costume Mario, assuming the form of a different character. These costumes can be collected by either clearing the 100 Mario Challenge, a gauntlet of randomly-picked courses; Event Courses, courses designed by game developers or parters; or Gnat Attack, a minigame from Mario Paint. There are over 100 different Mystery Mushroom costumes, and a number of them can alternatively be unlocked by scanning a compatible amiibo. Additionally, the game has its own amiibo, a 30th Anniversary Mario figure in Classic and Modern colors. Using the figure in-game creates a Big Mushroom, which allows Mario to become Big Mario, replaces enemies with Mario-themed variations, and causes the game to take on a CRT television-style filter.

The game was released on September 11th, 2015 worldwide (and a day earlier on the 10th for Japan), the Friday (and the Thursday, again for Japan) before the 30th anniversary of the Japanese September 13th, 1985 release of the original Super Mario Bros.

A re-release of the game for Nintendo 3DS was released on December 2, 2016. It includes all of the same development tools as the Wii U version except for the Mystery Mushroom and amiibo support (and the Big Mushroom wasn't made an unlockable to compensate for this, meaning it can't be used either), and does not include the ability to upload courses online or search for them by Course ID. It was the first first-party 3DS game without any 3D functionality. However, it includes Yamamura's Lessons (a tutorial mode discussing course design and how the various course elements work), Super Mario Challenge (a replacement of 10 Mario Challenge with medal objectives), and the ability to share courses via StreetPass and local wireless, including unfinished courses so others can complete them.

As of January 21, 2021, the Wii U version is unavailable to purchase from the Nintendo eShopnote It's still available to those who purchased it previously, and as of March 31, 2021, it's no longer possible to upload and bookmark courses, although all courses uploaded prior to the closure are archived online and remain playable.

A sequel, Super Mario Maker 2, was released June 2019. It introduces new gimmicks such as slopes, new level themes, and a graphic style based on Super Mario 3D World, including the Cat Mario power-up.

Arin and Dan try to get a rhythm stepping on the "P" switches by reciting "P" words.

Arin and Dan try to get a rhythm stepping on the "P" switches by reciting "P" words.