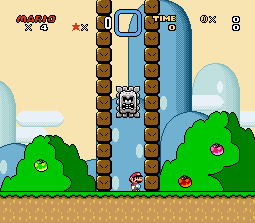 You want your Super Mario?
Here's your Super Fucking Mario.
"This is the video game version of cutting yourself."
— ProtonJon, playing Kaizo's Special World 2

An insanely difficult ROM Hack of Super Mario World, Kaizo Mario World (literally, "Hacked" or "Remodeled" Mario World; known as Yūjin Mario in Japan) is well known for being the Trope Codifier of the Platform Hell genre (well eclipsing the popularity of earlier examples such as Jinsei Owata no Daibouken and the then-unnamed Super Mario Forever), and for being the game that launched a lot of Let's Players' careers on YouTube.

The whole thing is rumored to have started as a simple Mario World hack made by a Japanese internet user to challenge their friend, and by some unknown stroke of luck, was found and LPed by a team of Something Awful LPers as 'Asshole Mario World', based off the difficulty. The popularity of these original playthroughs spread across the internet, causing a lot more people to play the game. This hack is also pretty much the entire reason the vast majority of Mario hacks, regardless of game, are sadistically hard, especially those that have been made with the explicit purpose of submitting them to LPers so they can torture themselves for everyone's amusement.

See also I Wanna Be the Guy, and similar ROM hacks Casio Mario World and JUMP .