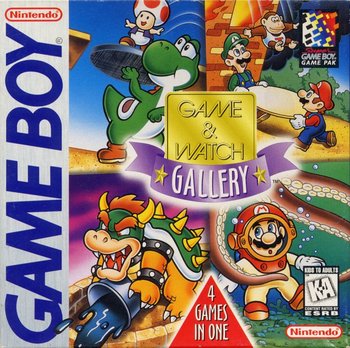 Four games were released for this series (five counting Game Boy Gallery, which predates the first game to actually use the Game & Watch Gallery name but was only released in Europe and Australia), each containing a few new versions of the Game & Watch games. In all of the Gallery releasesnote except for Game Boy Gallery, where all of the recreated Game & Watch games use "Classic"-style gameplay mixed with a "Modern" art style, the updated Game & Watch games can be played in two different visual styles: "Classic", which is a recreation of how the games originally looked, and "Modern", which uses a new visual style that utilizes the characters from the Super Mario Bros. series.

Tropes that apply to the Game & Watch Gallery series: