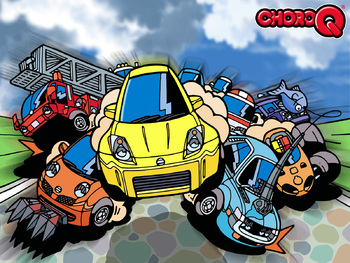 A Japanese racing game series based on pullback toys created by Takara Corp. since 1978. The toys the games were based on were chibi cars with small ledge between front and back tires with a license-plate esque coin slot the back (which also tells the series number of the cars). With a coin inserted in the slot, the car will be able to do wheelies and stunts, hence being sold in the Western hemisphere as "Penny Racers". The majority of them are caricatures of actual cars, although since the end of 90s the exterior detail and rarity increases (while still being Super-Deformed) to the point that the Japanese made toys are legitimate collector items. Its popularity has led the company into making many spinoffs of the series. There were even low-priced imitators of the toys — Shoddy Knockoff Products. The series did get imported overseas under the names "Gadget Racers", "Penny Racers" and "Road Trip" with help from other companies such as Conspiracy Entertainment, Midas Interactive Entertainment and Play It!.

The series is auto racing with an element of Wacky Racing combined with loads of customizable bodies and parts. For instance; wings, water jet pack, speed boosters, gliding wing, and time circuit. The customization in Choro Q is almost unlimited. You can put a racing engine in a garbage truck and drive in for a championship, or putting a huge 4×4 tires and wheels into a Le Mans vehicle to drive a hill climbling, or even a tank on a high-speed oval test course.

In 1997, Choro Q2 introduced the Wide-Open Sandbox system that allows you to take a run around a town, unlocking shops and courses. Choro Q3 (1998) added events and special hidden items into its town. And starting from Choro Q Wonderful (1999), the series introduced a full term of racing adventure system, complete with its own story and let you take a run between town, dungeons, or even time to advance the plot and unlock more courses. This concept is fully returned in the High Grade series from Choro Q HG 2 to Choro Q HG 4, in which HG 2 and HG 4 are imported to Europe and North America, in the name of Road Trip Adventure and Choro Q, following in the order. (HG 3 was also released in Europe under the name Gadget Racers. Which was also the name used in the US release of HG 1, so that's rather confusing - and it gets worse, as this video

demonstrates) And it's said that Road Trip Adventure is the best Choro Q game that exists outside Japan.

The original Mini Autobots (Brawn, Cliffjumper, Bumblebee, Windcharger, Gears and Huffer) were largely based off of this line.

The spins off genre of the series are in the following list: