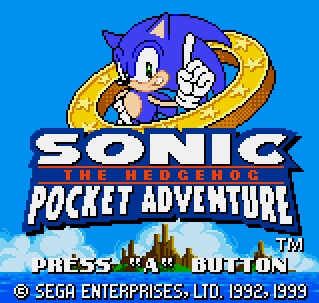 It was developed by SNK (who were also responsible for creating the Neo Geo Pocket Color itself), including people who would later establish the company Dimps. Dimps went on to develop games starring Sega's prickly little mascot, such as the Advance trilogy (the first of which has several nods towards this game), the Rush titles, the Wii/PS2 versions of Sonic Unleashed, Sonic the Hedgehog 4, the DS version of Sonic Colors and the 3DS versions of Sonic Generations and Sonic Lost World.

Often considered one of the best Neo Geo Pocket titles, and to many fans, Sonic the Hedgehog's best handheld game of the 8-16 bit era, especially following the poor reception to Sonic Blast and the Game.com version of Sonic Jam a few years prior. Despite this, Sonic Pocket Adventure has never seen an official re-release on newer platforms.