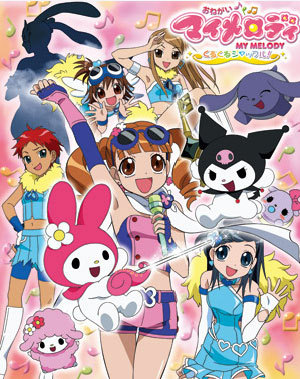 In Mari Land, a picturesque world entirely populated by Ridiculously Cute Critters, two criminals named Kuromi and Baku are imprisoned in a dungeon. One day, they obtain the Melody Key, a magical instrument with dark powers, and escape from the prison. They head to the human world in order to collect Black Notes by making people's dreams come true in horrible ways, with the eventual goal of resurrecting the Spirit of the Dark Power. Meanwhile, an acquaintance of Kuromi named My Melody is suspected of helping the two fugitives escape. She is ordered to go to the human world to arrest them and save people's dreams. My Melody arrives in Yumegaoka City and helps a junior high school student named Uta Yumeno when she falls victim to Kuromi's Melody Key. The two become friends, and My Melody starts living with Uta. After that, My Melody and Uta are involved in various troubles caused by Kuromi, but they solve them using My Melody's Melody Takt, a magical conductor's baton.

Onegai My Melody is an anime series based on the character created by Sanrio, directed by Makoto Moriwaki with Takashi Yamada as the head writernote Kazuki Yamanobe used to be the head writer for the first 28 episodes of season 1, and later Yamada took his position for the rest of the series starting with episode 29. and Tomoko Miyakawa as the character designer. the series has overall four seasons with each one has 52 episodes. And there's also a Light Novel sequel, named High School~, released in 2013.

As each season of the series progresses, newer tasks fall to My Melody and her friends. In ~Kuru Kuru Shuffle!~, My Melody must collect Pink Notes while Kuromi must collect the Black Notes so they can fulfill their wishes. In Sukkiri♪, both My Melody and Kuromi are candidates to become the new Princess of Mari Land. The fourth series, Kirara★, is a prequel story taking place before them all, where a human named Kirara gets trapped in Mari Land and must team up with My Melody to collect the missing pieces of the Wishing Star so that she can return to the human world.

The anime would later get replaced by another popular Sanrio franchise called Jewelpet; speaking of which, a My Melody short film called You and I, about Kuromi trying to steal some food My Melody is cooking for a barbecue, was screened alongside Jewelpet the Movie: Sweets Dance Princess.

Do your best reading the tropes, onegai?

Uta is jealous that Miki gets to go over to their crush's house and not her.

Uta is jealous that Miki gets to go over to their crush's house and not her.