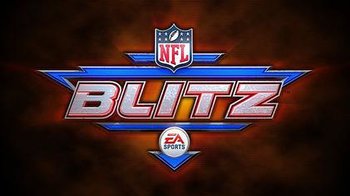 NFL Blitz is a series of American Football games based on the National Football League originally created by Midway Games. Blitz was the first of several franchises that took the NBA Jam formula of stripped-down rules and controls combined with amped-up violence and spectacular plays and applied it to another sport. The first Blitz came out as an arcade cabinet in 1997, and it was an immediate smash hit, not just because it was easy to pick up and play, but because—as the Blitz name might tell you—it presented an absurdly over-the-top version of the game, where there were only 7 players on each side, quarterbacks threw 30-yard passes on every down (in fact, the speed and lower number of players meant you had to gain 30 yards for a first down instead of 10), defenders used Professional Wrestling throws to tackle the ballcarrier, and late hits were all but encouraged. That success meant that home ports soon followed, along with sequels every year up until 2003.
Advertisement:

In its heyday, Blitz was the arcade yin to Madden NFL's sim-style yang, spawning a slew of imitators and even outselling Madden some years. Even to this day, NFL Blitz 2000 in particular is revered as the pinnacle of arcade-style football, and it's still relatively easy to find as an arcade cabinet. Unfortunately, the violence that made Blitz in players' eyes and set the series apart was also the exact thing that worried the NFL—even in the '90's, when concussions weren't taken as seriously and the league glorified its brutality. Thanks to league pressure, little by little, the games slowed down their gameplay and became more realistic until, by the time NFL Blitz PRO came out in 2003, it was basically just regular football, only with no penalties and On-Fire mode. After the NFL finally gave its exclusive license to Madden, Midway struck out on its own, creating the Blitz: The League series as an elaborate F-U to show just how gory they could actually get, but after Midway's 2008 bankruptcy, EA bought out the Blitz license and tried to duplicate the success of their NBA Jam revival with a reboot in 2012, but this time, the NFL didn't allow the signature late hits and violence at all, creating an unsatisfying shell of a Blitz in the process.