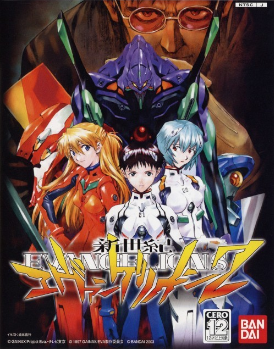 While on the whole an Adventure Game, which allows the allows the player to play through different "Scenarios", where they follow several central characters through several different versions of the plot of the series, the game also has RPG Elements, as well as some Dating Sim, Raising Sim, and even Visual Novel elements.

Most notable about the game is the so-called "Classified Information", which was hyped as a major selling point for the game prior to its release. In practise, the "Classified Information" is a compendium of facts about the universe of Evangelion, which is gradually unlocked during play, and expands quite a bit on the lore of the franchise, especially in many places where the TV series remained silent on the matter. In addition, as the different scenarios shifts to different characters, their perspectives are examined to a much greater detail than in the show, which also fills out some details about lore and character motivations that the show left unstated.

The later part is has caused some controversy in fan circles, as it raises the question of how involved Evangelion's creator, Hideaki Anno, was with the development of the game, and how true to the show's canon the Classified Information should be seen as despite some of the Classified Information being accepted by Studio Gainax as “canon”. According to all official sources, Anno was interviewed "extensively" by the developers and consulted on the game, and the developers also insist that, lore-wise, everything stated in the game should be accurate to Anno's instructions. Anno himself has remained vague on the matter, merely saying that all the information need to understand the story is included within the show, and no additional material is needed.