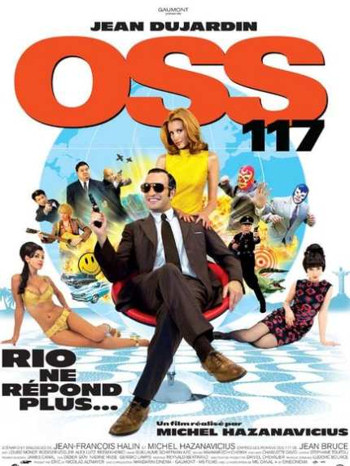 OSS 117: Lost in Rio (OSS 117: Rio ne répond plus) is a 2009 French spy comedy, and the the second film (also directed by Michel Hazanavicius) about the comedic misadventures of Hubert Bonisseur de la Bath, a.k.a. OSS 117.

In this installment, 117 is sent to Brazil in 1967 to obtain a list of French World War II collaborators from an old Nazi. While there, he meets up with a foxy Israeli spy named Dolores who is determined to capture the Nazi. Of course, the idiotic 117 can't stop embarrassing her with his blissful ignorance and prejudices.

Like its predecessor, OSS 117: Cairo, Nest of Spies, the film stars Jean Dujardin as a version of the OSS 117 character who might be best described as Sean Connery's James Bond... if Bond were both amazingly stupid and paternalistically racist. Based on a not-at-all satirical series of French spy novels, which first inspired not-at-all satirical spy films, mainly in The '60s.