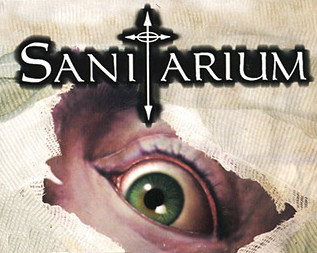 "If Jacob's Ladder was reality squared, this is reality cubed"
— J.C. Herz (The New York Times) on the game
Advertisement:

Sanitarium is a 1998 Point-and-Click Adventure Game by ASC Games. It is set in a mental hospital, except when it isn't.

More clearly, it begins with the main character losing his memory and being instituted in a sanitarium. Occasionally, he is transported to strange, alternate worlds, sometimes changing his form, sometimes not. A constant feeling of bewilderment and fear follow you as the worlds you visit become stranger and stranger.

You need to figure out many things: Why have you lost your memory? Why are you in an insane asylum? Is the asylum the "real" world, or is it just another dream?

Not to be confused with the Slender Fan Sequel Sanatorium.