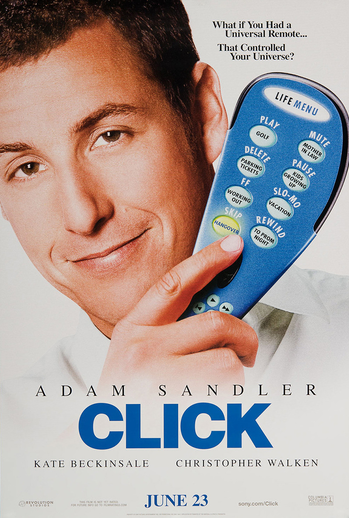 To change your life, all it takes is one simple...
Morty: Consider the leprechaun.
Michael Newman: What?
Morty: The one in the cereal commercials.
Michael: (Imitates Irish accent) 'They're magically delicious'? (Changes back to normal voice) That guy?
Morty: He's always chasing the pot of gold, but when he gets there, at the end of the day, it's just corn flakes.
Advertisement:

Click is a 2006 American dramedy film, directed by Frank Coraci and starring Adam Sandler, Kate Beckinsale, Christopher Walken and David Hasselhoff. It was released in North America on June 23, 2006 by Columbia Pictures and Revolution Studios.

The film follows Michael Newman (Sandler), a married architect with two children. Michael loves his family, but is easily pushed around by his overbearing boss Mr. Ammer (Hasselhoff) and has little time for them. One night, after Michael loses his temper at the amount of remote controls in the house, he goes in search of a universal remote control for his appliances. At a Bed Bath & Beyond, Michael collapses onto a bed and falls asleep, before waking up and proceeding to the section marked "Beyond." There, he meets the mysterious Morty (Walken), who happens to be an eccentric inventor. Morty takes him to a room marked "Way Beyond" and gives him a universal remote control and warns that it can never be returned. To Michael's amazement, he finds out that the remote literally controls the universe, in particular allowing him to control time. The story follows Michael's experiments with the device, as well as the consequences and lessons resulting.

Not to be confused with a Goosebumps short story of the same name with the same concept, albeit done in a different fashion.