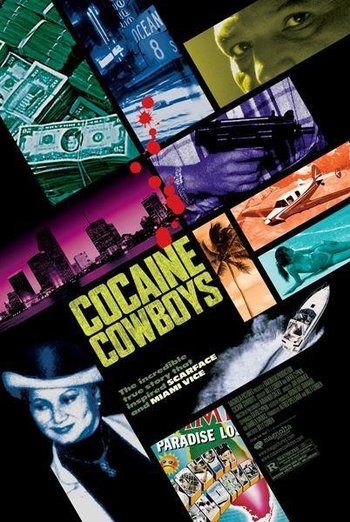 Cocaine Cowboys is a 2006 documentary about the rise of the illegal cocaine trade in Miami, Florida and the resultant crime epidemic during the 1970s and 80s. The movie chronicles the development of the illegal drug trade in Miami during the 70s and 80s, focusing on the immense and easy riches as well as the resulting gangland violence and bloodshed. The story is told primarily from the perspectives of Jon Roberts and Micky Munday, who helped transport cocaine for the Medellín Cartel as well as Jorge "Rivi" Ayala, the main enforcer for notorious Cartel drug lord Griselda Blanco AKA "The Godmother".

The 2008 sequel In Name Only, Cocaine Cowboys II: Hustlin' with the Godmother, documented the relationship between Oakland crack dealer Charles Cosby and Griselda Blanco against a backdrop of the early 90s crack cocaine scene. The second film is smaller in scope, dealing primarily with Cosby and Blanco's relationship as opposed to the first film's assorted cast of characters.