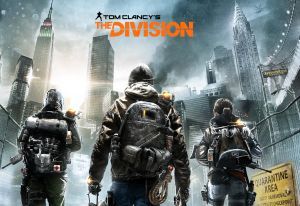 Welcome to the quarantine zone.
"When society falls, we rise."
Advertisement:

Tom Clancy’s The Division is a Third-Person Shooter Massively Multiplayer Online Role-Playing Game open-world under the Tom Clancy brand (such as Ghost Recon and Splinter Cell, note though it should be noted that Clancy himself was not involved directly in the game as he died before it was created. by Ubisoft Massive, announced at E3 2013. Released on Playstation 4, Xbox One, and PC on March 8th, 2016.

In the year 2001, the American government carried out a secret simulation designed to test how well federal services could cope with a bio-terrorism attack on home soil. The results of "Operation Dark Winter

" revealed that America was far more vulnerable than previously thought, predicting a complete societal collapse within five days. This led to the creation of "Directive 51

" as a safeguard against a real Dark Winter scenario, secretly signed and put into effect by the President in 2007.note This is, as the wiki links note, actually largely historical fact, aside from The Division being organized the way it is. There are classified parts of Directive 51 in reality, so it's a little unclear just how the response agency is actually organized.

Years later, in the near-future, a deadly virus is unleashed within New York City and soon pushes civilised society to the breaking point. The Strategic Homeland Division, otherwise known as the SHD or simply "The Division", calls to action a number of highly-trained, self-supported sleeper agents situated all across America. Their duty is to investigate and contain the crisis at all costs before it can spread any further.

The Division involves an interesting gameplay mix of Watch_Dogs (user interface), Ghost Recon (tactical, squad-based mechanics and cover playing a significant role in gameplay), and Borderlands (RPG Elements, Skill Scores and Perks and Incredibly Durable Enemies). The game also introduces "Snowdrop", a new proprietary engine that Ubisoft will use for The Eighth Generation of Console Video Games. Ubisoft revealed the game through a seven-minute trailer

, consisting of nothing but gameplay and improvised dialogue from demonstrators.

There are plans for a live-action movie, which is currently in pre-production with Netflix having the rights to stream the movie online.

The Division 2, a sequel set in the aftermath of the Green Poison outbreak and taking place in Washington D.C., was released on March 15, 2019.

The Division: Resurgence, a free-to-play mobile game, was announced

following soon after. The game is slated to take place between the first two Division games and is mostly an Updated Re-release of The Divison, with a few gameplay elements returning from The Division 2 like Specializations.

The Division provides examples of: