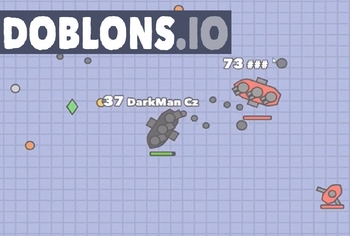 A firefight between mid-game and late-game ship.
Advertisement:

is a multiplayer Web Game released on 22nd September, 2016 by an Australian programmer Sidney De Vries, who later went on to create MooMoo.io and Krunker.io. Its initial version was developed over 4 days.

It is about pirate ships fighting each other and/or the occasional AI-controlled boss, and collecting the titular doblons to upgrade themselves. There are two types of upgrades - straight-up stat increases, which are purchased with doblons, and add-ons to the ship, which are only available once the ship levels up, and can be placed at the Front, Side, Deck or Rear.