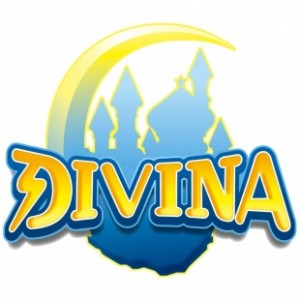 Divina Online's logo
Divina Online is an MMORPG developed by Gamania and hosted on Beanfun!, the same developers of Lucent Heart. The setting takes place in Norse Mythology, in which the main quests are based off of major events from it. The Player character wakes up in a ruined area named Sacred Springs after the war of the gods (known as the Ragnarok), and on exploring outside the town, found a girl who has amnesia, though she remembers her name as Clarisse. After returning to town, an unusual power overcomes her, and with the player close by, was able to warp back 50 years before the events of Ragnarok occurred. The player then sets on a quest to stop the events of Ragnarok in order to save the future.

Six months after the English release, the U.S. server of the game was shut down after Beanfun services were closed in the U.S, though servers still exist in Taiwan, Korea, Japan, and even in French.

* Luke, I Am Your Father: One of the NPCs explain that Loki is the father of Clarisse. Many players, in spite of playing throughout the game, Did Not See That Coming