Video Game / Donkey Kong 5: The Journey of Over Time and Space 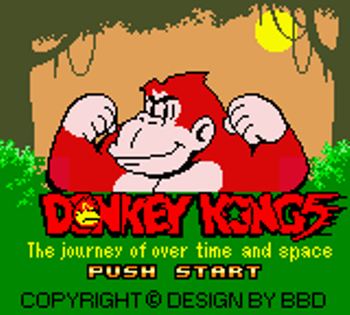 Donkey Kong 5: The Journey of Over Time and Space is a bootleg video game based of Donkey Kong. It was developed by Sintax for the Game Boy Color in presumably 2001.

The game's story is both simple and rather weird. It's about a kind girl named Sodoma, who managed the world's ecology, but the Lombado (Which doesn't really appear in the game, unless you count Dracula) a bducts (sic) her, which destroys bananas and fruit Donkey Kong loved so much. This makes him thinner and thinner, eventually he turns into Diddy Kong. He then sets off to rescue Sodoma.

The gameplay's just about the same as Super Mario Bros., only there are bananas instead of coins, meat instead of mushrooms, a bell on a rope replaces the flagpole, and the boss is Dracula, not Bowser.