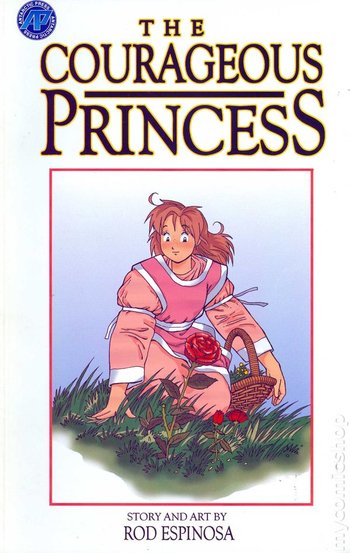 The Courageous Princess is a comic series by Rod Espinosa.

Mabelrose is princess of the small kingdom of New Tinsley. Not the richest or most fashionable fairy-tale kingdom around, but she has loving parents and gets to play with other kids in her kingdom, so she's a very much sweet princess.

One evening, the dragon Shalathrumnostrium plucks her up and whisks her away to his lair to be an ornament and bait for the wanna-be dragonslayers he so loves to roast. With prospects for a handsome prince coming to her rescue looking very slim, she resolves to escape, aided by her wits, courage, the kind people she meets, and a few magic items pilfered from the horde.

Thus our princess attempts to make her way home, just ahead of one very irate dragon and his monstrous armies.

The series consists of three volumes: