Video Game / The Divide: Enemies Within 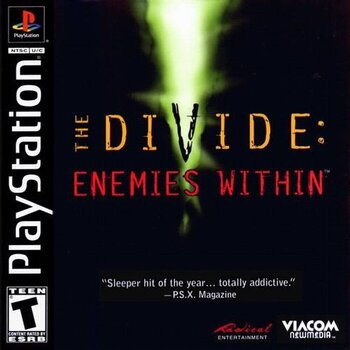 The Divide: Enemies Within is a 1996 3-D Metroidvania-style action game made by Radical Entertainment and Viacom, directed by long-time Metroid Ian Verchere who in fact wants to make "his own version of Metroid" since the PlayStation could never get the rights to the Metroid series due to it being a Nintendo property.

Lifted backstory aside, instead of a bounty hunter you play as a space explorer; finding an uncharted planet where a probe was lost after launch, you beam down on an ice-covered alien world in your mech-suit to perform a routine sweep of alien life, only to be ambushed by an alien monster and disabled. Covered in the snow and somehow still alive, you remain frozen in suspended animation on the planet's long winter, until the next spring thaws you out.

Awakening in an alien jungle, you realize you're alone on a planet full of hostile extraterrestrial monsters. And must repair your mecha and escape.

The Divide: Enemies Within contain examples of: