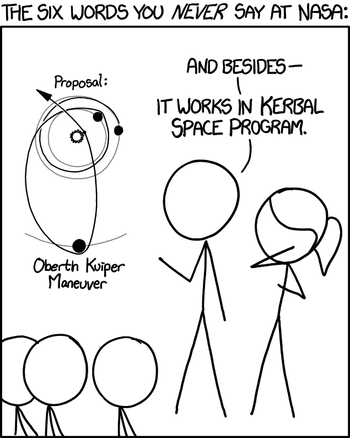 The Crew of the Cool Starship is on the verge of a planet's gravity well or near an Unrealistic Black Hole. Perhaps they are too close for the engines to escape gravity's grasp. Perhaps an enemy ship is closing them. All seems lost...
Advertisement:

Then the Ace Pilot makes a suggestion: Head straight for the planet / black hole! The rest of the crew look at him as if he was mad, but follow his plan, and like magic, they pick up speed and wind up shooting out of the gravity well at incredible speed using gravity to perform a slingshot maneuver

Of course, pulling a successful Slingshot maneuver would require some precise maneuvering and calculations, but often in fiction, it's entirely possible for the Ace Pilot to just eyeball it.note It also requires either the slingshot to be around an object orbiting a more massive object, or a decent amount of thrust during the slingshot. In the former, the energy to escape comes from the orbiting body. In the latter, it's the "Oberth effect" — the same amount of rocket fuel gives you more energy if you're already moving faster. Because the pilot is just that good.

Invariably, when the move is first suggested, almost everyone is incredulous, and it always fools the enemy. Almost like no-one has ever heard of a slingshot maneuver before, or is able to spot when the other side is about to perform one. And, of course, the maneuver is always used as a last-ditch desperation maneuver, rather than a standard tactic or move.

Often used as an Establishing Character Moment if it occurs early in the work, to show the Ace Pilot's skills. If calculations are made, it might act as such a moment for The Smart Guy, too.

The closest thing in real life to what the pilot does is entering an unstable orbit. But no matter what, that black hole is definitely pulling you in, and if you can't generate enough force to escape the gravitational field directly, you're probably screwed.

In Real Life, gravity assists are a well-known and often-used phenomenon and have far wider applications (and limitations) than those depicted in fiction. The Other Wiki does a good job explaining the ramifications.

See also Gravity Sucks, Unrealistic Black Hole, and Space Friction, which may factor into the maneuver. Sometimes combined with a Wronski Feint if the enemy is tricked into following and can't escape.