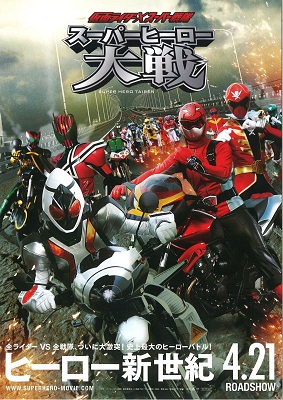 When all hell's breaking loose, you'll be right in the eye of the storm.

Kamen Rider × Super Sentai: Super Hero Taisen is a film (released April 21, 2012) that pits Toei's two most prominent Toku franchises against one another in a giant Crossover battle. Captain Marvelous, AKA Gokai Red, has formed Dai-Zangyack and attacks the Kamen Rider universe, hoping to claim their Grand Powers and the Ultimate Treasure in the Universe, mainly assisted by the freshly renamed Rider Hunter Silva. Opposing them is Dai-Shocker, reformed by Doctor G and again led by Tsukasa Kadoya AKA Kamen Rider Decade AKA Great Leader. Meanwhile, Rangers and Riders on both sides of the conflict are left wondering what's going on and why they're even fighting to begin with.

Oh, and it features nearly 300 Rangers, Riders and villains fighting alongside one another.