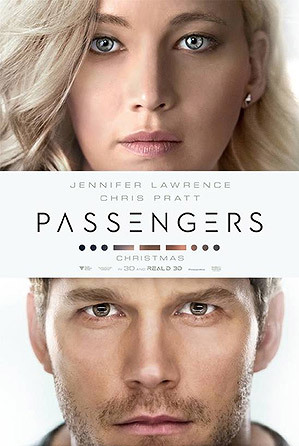 There is a reason they woke up.
Advertisement:

The Avalon is a Sleeper Starship on a 120-year trip from Earth to Homestead II, a colonized planet in distant outer space. Due to a ship malfunction, one of the passengers aboard — engineer Jim Preston (Pratt) — is accidentally awoken 30 years into the trip, and try as he might, he is unable to re-hibernate himself. The prospect of what will become of the remaining 90 years between him and his destination is a crippling one for him to come to terms with, and loneliness sets in hard shortly after.

In the depths of his despair, Jim stumbles across a woman in her pod, Aurora Lane (Lawrence), and becomes smitten with her to the extent of contemplating an unthinkable decision: whether or not to consciously awaken Aurora from her pod to share his fate.