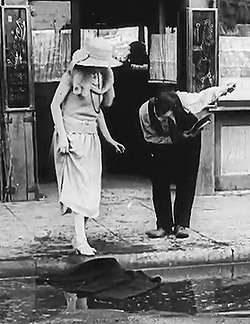 Waldo: So I took off my jacket and put it over the puddle, so Maxine’s feet wouldn’t get all muddy.
Eddie: Ahh, nice move. Very gallant.
Maxine: And then he picked up the jacket and wrapped it around my shoulders.
— Family Matters
Advertisement:

A trope Older Than Print: a man notices an attractive lady confronted with a puddle of water or mud. In a gesture that shows he's a true gentleman, he takes off his coat or his cloak and puts it over the puddle so that the woman can walk across without becoming wet and ruining her shoes. Given that women's shoes at the time were often quite fragile and delicate, while men's coats often were intended to be robust, warm, thick, and suitable for heavy outdoor use, and that recently-fallen rainwater was much cleaner in the days before heavy industry and ubiquitous, filth-spreading automobiles large and small, this is less crazy than it sounds. On the other hand, the ubiquity of the horse, especially in urban areas, would have made this quite a bit less attractive.

In Britain, the image is very frequently associated with the story about Sir Walter Raleigh — see Real Life, below. A Dead Horse Trope, nowadays this will almost always be Played for Laughs and/or subverted. Having the coat conceal a manhole or other hazard she promptly sinks into seems to be a popular joke.

A Sub-Trope of Old-School Chivalry and Women Are Delicate.

open/close all folders
Advertising
Anime & Manga
Comic Books
Advertisement:
Films — Animated
Films — Live-Action
Literature
Live-Action Television
Music
Professional Wrestling
"You do not put a coat down over a mud puddle for Daizee Haze. Uh, uh. I jump in that puddle. I get down and dirty."
Webcomics
Web Original
Western Animation
Real Life