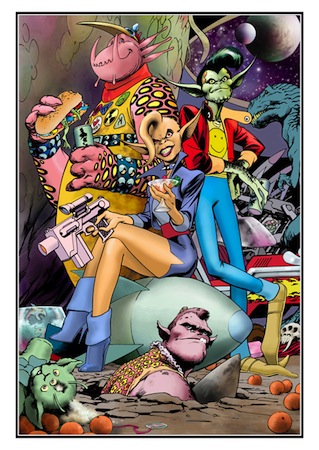 "My name is Ernie Quinch, college student. I like guns and starting fights. My psychiatrist says I'm a psychotic deviant. But that doesn't mean I'm a bad person, right?"
— Ernest Erroll Quinch, "D.R. & Quinch Have Fun on Earth"
Advertisement:

Hey, man, let me tell you about something that's, like, totally amazing...

While Alan Moore is mostly known nowadays for writing dark, serious stories set in crapsack worlds, such as Watchmen and V for Vendetta, D.R. & Quinch stands out as something very, very different.

It all began at The Galaxy's Greatest Comic where a young, budding Alan Moore was frequently tasked with writing for the Tharg's Future Shocks and Time Twisters strips. These would always be brief, self-contained stories that are rarely over five pages long and would usually end with a Twist Ending of sorts (often of the Cruel Twist Ending variety).

about two teenage alien miscreants who steal a time machine and head out to a little planet way out in the boondocks that no one else in the galaxy would ever care about called "Earth," all in part of an elaborate revenge scheme on their college dean for suspending them after he found stolen goods and laser guns in their locker. This story was originaly published in issue #317 (May 21, 1983). The characters were intended to appear only once in the pages of 2000 AD, but they became so popular with readers that they would get their own series.

In what can best be described as "Rule of Funny meets For the Evulz," D.R. & Quinch tells the totally amazing story of one Waldo "D.R." Dobbs (the "D.R." stands for "Diminished Responsibility"), a skinny, lanky, teenage delinquent who boasts a genius IQ, enjoys acts of extreme violence and destruction, and looks like a cross between a gremlin and a skrull with a pompadour, and Dobbs' best friend Ernest Erroll Quinch, a large, purple-skinned brute who is much, much quieter than Dobbs as he prefers writing to talking. Together, these two deeply sociopathic, evilly affable, omnicidal maniacs do as they please, and what pleases them usually involves death and destruction on a tremendous scale; it helps that, in their part of the Milky Way, nuclear warheads are as easily obtainable as a handgun in the Deep South.

Along with their two occasional companions (and, presumably, only other friends in the galaxy, besides each other) Crazy Chryssie (D.R.'s equally violent girlfriend) and Pulger (a war veteran who is always prepared for combat, just in case Charlie launches a sneak attack), the delinquent duo have been on a handful of adventures in which they influence all of human evolution (including, very fittingly, the Survival of the Fittest) and a lot of Earth's history, get drafted by the army to fight in a war similar to The Vietnam War, and even making a cult film.

Unfortunately, the strip, did not last long at 2000 AD, as Moore had a tumultuous falling out with illustrator Alan Davis after a disagreement over the reprinting rights to other works the two had collaborated on in the past. Needless to say, Moore abandoned the characters in the aftermath of this, marking the end of D.R. & Quinch's appearances in 2000 AD save for small collection of one-page-long strips known as "The Agony Pages," written by Jamie Delano and Alan Davis.

Only five complete adventures were written by Alan Moore after D.R. & Quinch's first appearance, but despite there being such a small amount of material, the characters remain tremendously popular with the readers of 2000 AD, and the strips continue to be reprinted in paperback trade editions. Overflowing with totally amazing Black Comedy and with a sprinkle of Surreal Humor here and there, D.R. & Quinch stands out as some of Alan Moore's funniest, most entertaining work and serves as evidence that he has one incredible sense of humor.

When you read Watchmen, you think Alan Moore is a genius.

When you read D.R. & Quinch, you think Alan Moore is totally amazing!