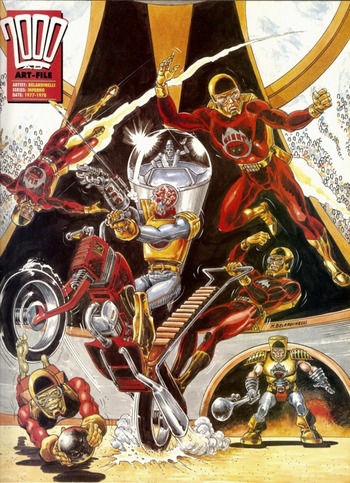 Harlem Heroes is a comic strip run in 2000 AD, created by Tom Tully and Dave Gibbons with the basic concept thought up by Pat Mills. One of the title's launch strips, it focused on an African-American Aeroball team and their quest for the world title in the year 2050. A combination of American Football, Basketball, Boxing, Professional Wrestling and Kung Fu with jetpacks, the sport is quite brutal, with fatalities common.

When the Heroes suffer a road accident, they must recruit new players and continue the season.

A more violent sequel, known as Inferno, had the Heroes renamed the Harlem Hellcats and participating in the titular Blood Sport.

In 1990, Michael Fleisher scripted an In Name Only revival set in an Alternate Continuity (the original is set in the same 'verse as Judge Dredd) focused on a gang of convicts who are nicknamed The Harlem Heroes in prison due to their skill at Aeroball. Because of the sheer number of strips he scripted for 2000 AD (particularly Rogue Trooper), some of his later Harlem Heroes strips appeared years after he left the comic.

The original strip provides examples of:

The '90s revival provides examples of: