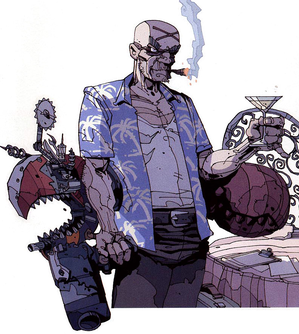 Lobster Random is a comic strip that ran in 2000 AD, created by Simon Spurrier and Carl Critchlow.

Lobster Random was once just an average grunt. After being wounded in combat (his first gunfight no less), he is "volunteered" into the Lobster squad and given a pair of lobster claws grafted onto his hips. The result of this is he can no longer feel pain nor does he need to sleep. After winning the war, his entire unit barring himself are wiped out in an explosion at a celebratory party. Lob himself is discharged and becomes a torturer for hire.

After many years traveling the galaxy dispensing pain, he is apprehended and sent to prison. Our story begins as Lob is about to be executed by use of a memory regression machine when he is rescued with a job offer.

The strip is known for its Black Comedy and its protagonist is in keeping with the comic's tradition of avoiding square jawed handsome hero types.