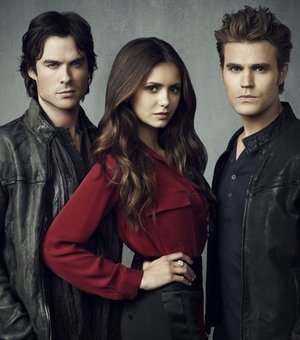 The Vampire Diaries is a supernatural drama television series loosely based on the book series of the same name by L.J Smith. It ran on The CW from 2009 to 2017 for eight seasons.

The series is set in the town of Mystic Falls, and focuses on high school student Elena Gilbert (Nina Dobrev), recently recovering from her parents' deaths alongside her younger brother, Jeremy (Steven R. McQueen), while under the care of their aunt, Jenna Sommers (Sara Canning). Elena's life changes when she meets Stefan Salvatore (Paul Wesley), a new student who attracts the attention of herself and her friend Caroline Forbes (Candice Accola), as well as jealousy from Elena's childhood friend, Matt Donovan (Zach Roerig). Upon the urging of her best friend, Bonnie Bennett (Kat Graham), Elena pursues Stefan, who is later revealed to be a vampire. Around the same time, Matt's sister, Vicki (Kayla Ewell), gets bitten by what is believed to be an animal. In reality, she was bitten by Stefan's estranged older brother, Damon (Ian Somerhalder), back in town to reunite with a lost loved one — a vampire that happens to look exactly like Elena.

Other main characters include Tyler Lockwood (Michael Trevino), son of the mayor and a football jock; Alaric Saltzman (Matt Davis), a history teacher who has a score to settle with Damon; Niklaus "Klaus" Mikaelson (Joseph Morgan), one of the very first vampires known as the Originals; and Lorenzo "Enzo" St. John (Michael Malarkey), Damon's old vampire acquaintance.

While the premise is the same as the books, the TV series has significant differences. Writer Kevin Williamson has stated he was more interested to narrate the story of the town, Mystic Falls, rather than focus on a high school setting. Great attention is paid to the history of Mystic Falls, while character background, personalities and events were changed or switched around.

It is the first entry in The Vampire Diaries Universe. In 2013, the series spawned a spin-off, The Originals, which revolves around Klaus and his family, the titular Originals. It lasted five seasons and is followed by a spin-off of its own, Legacies, which focuses on Klaus' daughter, Hope (Danielle Rose Russell). It premiered the same year The Originals ended and is ongoing, with three seasons aired to date.

After becoming a vampire, Elena no longer cares about modesty and casually steps out of the shower in front of both of her Love Interests and her best friend.

After becoming a vampire, Elena no longer cares about modesty and casually steps out of the shower in front of both of her Love Interests and her best friend.