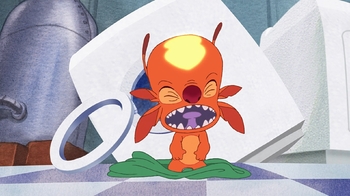 You can't stop him from hearing your lies.
"Fibber" is the fourteenth episodenote thirteenth in production order of Lilo & Stitch: The Series. It first aired on November 7, 2003.
Advertisement:

Lilo and Stitch manage to find Experiment 032, a lie detector experiment. Jumba explains that 032 forces people to tell the truth, with the belief that civilizations will fall into chaos when forced to tell the truth all the time. Lilo nicknames 032 "Fibber" and, after being ratted out for a lie, decides to have him stay with—and be looked after—by Stitch. Stitch is not thrilled to have to keep an eye on Fibber.

That night, Pleakley's phone rings, waking up Lilo and Jumba. The caller is Pleakley's mother, who announces to Pleakley that she has found him someone to marry, and that there is going to be a big wedding for him and the girl back on his home planet. He is to pack his things and wait to be picked up.

Pleakley is upset by the news, so Lilo urges him to call his mother and say he already has a fiancée. Pleakley manages to successfully lie (even with Fibber buzzing in the background), only for his mother, his sister Pixley, and his brother Bertley to show up at the house shortly thereafter.

Needing a girl to pose as Pleakley's fiancée, Lilo decides to convince Nani to pretend to be the fiancée. Nani is reluctant, but only relents when she realizes Jumba would be a lousy caretaker for Lilo should Pleakley leave. As the ʻohana and Pleakley's family talk about her and Pleakley's "wedding", Nani begins to have second thoughts when Mrs. Pleakley states that Pleakley and her should have a proper ceremony to exchange "intergalactically eternal binding vows". David calls the house and learns of Nani's "engagement" from Pixley, to his shock and confusion. Meanwhile, Stitch is driven crazy by Fibber's continuous buzzing as he keeps trying to hide him.

It is only when Mrs. Pleakley informs Nani that she got a real minister from Las Vegas to officiate the wedding does Nani back off. Although distraught by Nani's refusal, Lilo manages to get Jumba to become Pleakley's new fiancée, "Jumbina".

The wedding ceremony manages to go off without a hitch (with the exception of Fibber's buzzing), but before Pleakley and "Jumbina" can be declared husband and wife, David shows up with a bouquet of flowers, still assuming that Nani is still getting married, but realizes his mistake when he sees Nani in the house. As he is trying to explain himself, Gantu shows up.

Gantu has been off on vacation, and 625 has been left in charge of the spaceship. 625 takes advantage by throwing a wild party and drowning out the noise of the beeping container with music. Hämsterviel finds out and is infuriated. Gantu tries and fails to capture Fibber, but is defeated and thrown away by Stitch. However, Gantu manages to reveal to Pleakley's family Fibber's nature as a lie detector.

Pixley, Pleakley's mother, and Bertley proceed to say mean things about Pleakley to his face, only for Fibber to buzz at everything they say, revealing that their words aren't true. Bertley admits that he was jealous of Pleakley, as he thinks he is tall, handsome, and a babe magnet (all of which is true). Pixley confesses that she thought Pleakley was creative, and tried to make herself more ambitious than him so that she could be better. But all it has gotten her was "high-powered career, a custom shoe closet, and bone-searing loneliness!" Their mother tearfully admits their struggles are all her fault; she pushed them to be successful because she wanted them to be happy. She also thinks Pleakley isn't happy because he isn't married, but Pleakley admits that he doesn't want to be married at all, content to be single. Lilo and Nani add in that, although their families can annoy them, they will still love them.

As the Pleakley family is preparing to leave, Lilo wonders where Fibber's one true place is. Before she can figure it out, Gantu appears and steals Fibber. Pleakley's mother tries to go after him, but Lilo decides that Gantu needs a little chaos in his life and lets him have Fibber. Back at the spaceship, Gantu tries to explain himself to Hämsterviel, only to have Fibber buzz whenever he tells a lie. Hämsterviel puts him on probation, while 625 and Fibber become buddies.