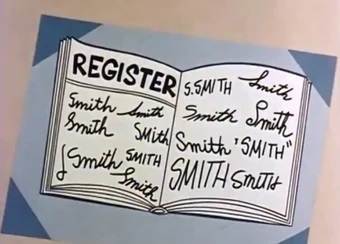 "Must be a common name round these parts"
Advertisement:

A couple obtain a hotel room under the name of "Mr. and Mrs. Smith" or some other — usually similarly bland — pseudonym. They may be married... just not to each other.

With relaxed sexual norms and most hotels requiring ID and a credit card to register nowadays, this is now mostly in Discredited/Dead Horse Trope territory.