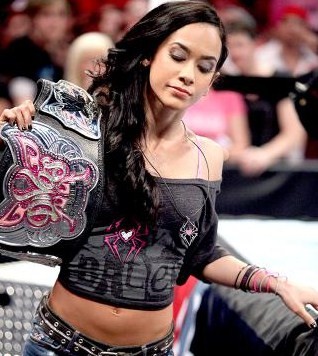 Here comes the crazy chick.
"I'm a monster. I wear a mask. My only source of pleasure is eviscerating people... and even I find you mentally unstable."
— Kane to AJ Lee, WWE Raw, June 25, 2012
Advertisement:

April Jeanette Mendez (born March 19, 1987) is an American author, former professional wrestler, and current executive producer of the Women of Wrestling (WOW) promotion. She is best known for her time in WWE, where she went by the ring name AJ Leenote the surname was derived from Wendee Lee, a voice actress for her favorite anime, Cowboy Bebop.

Mendez enrolled in a wrestling school in March 2007, where she trained for six months before her first official match, learning under people including Mo Sexton, Azrieal and Jay Lethal. In the following years, she performed for several Northeast-based independent promotions including Women Superstars Uncensored (WSU) as Miss April. In WSU, she was part of the AC Express alongside Brooke Carter, and the duo held the WSU Tag Team Titles once.

In May 2009, Mendez signed a developmental contract with World Wrestling Entertainment (WWE), and was assigned to Florida Championship Wrestling (FCW), WWE's developmental promotion, using the ring name AJ Lee. In FCW, she was Queen of FCW and FCW Divas Champion, and was the first person to have held both titles. In 2010, she was part of the third season of NXT, having dropped her last name. She became part of WWE's SmackDown brand in May 2011, forming a Tag Team with Kaitlyn known as The ChickBusters.

A self-professed nerd and tomboy, WWE adapted AJ's love of comics and video games to her on-screen character, endorsing her as different from the typical women in the WWE and promoting her as the "Geek Goddess". She became justly famous among wrestling buffs for defying the usual stereotypes of how WWE's Divas were supposed to behave, and she was named the "Diva of the Year" in the annual Slammy Awards twice (2012 and 2014).

Throughout most of 2012, while still a face, AJ portrayed a mentally unstable female character, the likes of which had not been seen in WWE since Mickie James in 2006. She also served as the Kayfabe General Manager of Monday Night RAW. She later became Divas Champion in June 2013 and lost the title to Paige in April 2014, leaving her as the longest-reigning Divas Champion in history at 295 days. After a three-month break

, she returned on June 30, 2014 and recaptured the Divas title by defeating Paige. After that, she lost it to Paige at SummerSlam, regained it at Night of Champions, and lost it to Nikki Bella at Survivor Series, making her a three-time champion.

After spending the end of 2014 and the start of 2015 healing from a neck injury, AJ made news in February of the latter year for openly criticizing WWE's treatment of its female wrestlers, stating that they received significantly less pay and screentime than male wrestlers even with record-selling merch and top-rated segments. This led to the viral hashtag #GiveDivasAChance and direct acknowledgement from both Vince and Stephanie McMahon. AJ then returned in March 2015, eventually allying with Paige against the Bella Twins and defeating them at WrestleMania 31. Shortly after on April 3, the official WWE Twitter account announced AJ's retirement from in-ring performance.

Post-WWE, Mendez dabbled in acting, appearing in a bizarre short film advertisement for Madden NFL 2016 titled Madden: The Movie. She was also portrayed by wrestler/actress Thea Trinidad in the film Fighting with My Family, a Bio Pic of Paige.

Currently, Mendez is most known as an advocate for mental health awareness and animal welfare, as well as an accomplished writer. She released a memoir in 2017 titled Crazy Is My Superpower that went on to become a New York Times bestseller; the book covers her life from her turbulent youth to her time in WWE, shedding light on topics including her specific reasons for leaving WWEnote permanent damage to her cervical spine and feeling that she had fulfilled all of her goals in the company and her lifelong struggle with bipolar disorder. She also found a writing partner in actress Aimee Garcia, with whom she has written two comic series based on GLOW (2017) and Dungeons & Dragons, started a production company titled Scrappy Heart Productions, and was selected to co-write an upcoming sequel to 47 Ronin. On her own, she has also written a Wonder Woman comic and made the Black List's inaugural Latinx TV List with one of her scripts.

After six years away from the wrestling industry, Mendez joined the Women of Wrestling (WOW) promotion as an executive producer in October 2021, and will also provide color commentary for them beginning in late 2022. That same month, she further revealed in an interview that she has "physically, mentally [and] emotionally" healed from her time in wrestling, and theoretically could return to the ring. However, she also stated that she is in no rush to do so, as she is comfortable with having the next generation of wrestlers take the reins.

Not to be confused with AJ Styles.