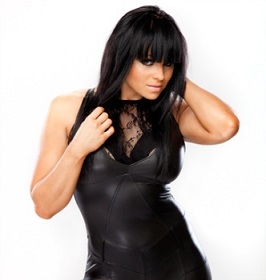 She will entertainment you.
Advertisement:

Born in the small village of Alytus, she began working in fitness from a very young age. At only seventeen, she participated in the IFFB European Fitness Championships - as the youngest participant in the contest. She competed in several more bodybuilding and fitness contests, eventually winning the 2009 IFFB Arnold Classic Competition. Shortly after this win, she was signed to a WWE developmental deal. She first debuted using the ring name 'Olga', but adopted the more familiar one of Aksana within a month. Initially the manager of Eli Cottonwood, she soon stepped into the ring herself. Her time in FCW was quite fruitful, as she defeated Rosa Mendes to become Queen of FCW and then shortly after claimed the FCW Divas' Championship from AJ Lee - becoming the first woman to hold both titles at the same time.

Aksana's most memorable time in WWE was part of the infamous all females season of NXT. Under the guidance of Goldust, Aksana competed for the chance to earn a WWE contract - while also fighting threats of being deported to Lithuania. She was the third woman eliminated from the contest, but soon reappeared on WWE television anyway. This time she was now a Femme Fatale, who appeared in Teddy Long's office to drop Innocent Innuendos. Naturally she couldn't be kept away from the ring for too long, and re-joined the women's division.

She was released from WWE in 2014 and retired.