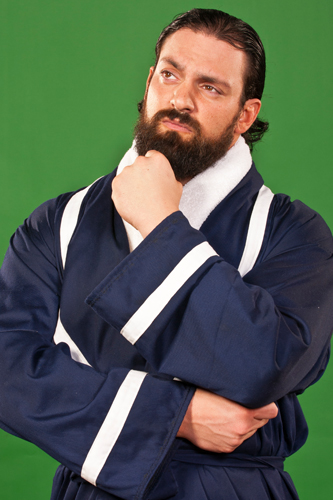 "Allow me to beg your indulgence for one moment..."
Advertisement:

Aaron Steven Haddad (born April 3, 1982) is an American professional wrestler, best known for his tenure with WWE under the ring name Damien Sandow.

He made his WWE debut in 2006 wrestling under the ringname Idol Stevens. He was one half of a tag team with KC James and managed by Michelle McCool. Stevens was released from WWE in 2007, and James lingered in perpetual jobberhood under the name James Curtis before following suit a year later. In 2010, Stevens was rehired and sent back to developmental, where he received a gimmick change and a new ringname (Damien Sandow). Originally portrayed as a militant character, as Col. Damien Sandow, he later received another gimmick change. He spent a good amount of his career as an Insufferable Genius-type character who proclaimed himself to be "The Intellectual Savior of the Unwashed Masses". Afterwards, he acted as a sort of Ditto Fighter to the rest of the WWE roster, mimicking the likes of Bret Hart, Vince McMahon, and most notably The Miz, as his "stunt double". In 2015, Sandow lost the breakup feud to Miz, was randomly thrown into a team with Curtis Axel, and then taken off television. After making sporadic appearances, Sandow was released in 2016.

Rather than being a disappointment, however, his WWE release made him one of the hottest free agents in the world, his popularity putting him in high demand. Returning to the Independents under the ring name Aaron Stevens, he's signed on for matches with several indie promotions, including Global Force Wrestling, What Culture Pro Wrestling (where the first name is spelled "Aron" and was nicknamed "The Savior"), Total Nonstop Action Wrestling (under the ring name Aron Rex), and more recently The NWA (Again, with his name spelled "Aron").

Among his in-ring achievements, he was one half of the WWE Tag Team Champions with The Miz, a former OVW Heavyweight Champion

"My name is Damien Sandow, and these tropes are here to help you."