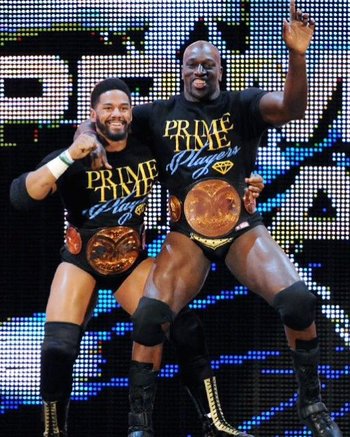 The Prime Time Players were a professional wrestling tag team, consisting of Titus O'Neil and Darren Young, who wrestle in WWE both getting their start on NXT, Darren during the first season, and Titus during the second, and both of them competing during the 5th season. The duo, who initially opposed each other in several matches, have managed to twice become the number one contenders for the WWE Tag Team Championship. As the team name suggests, their gimmick portrays them as young, brash, and cocky, dubbing themselves as "The Real Deal" and "Mr. No Days Off", respectively. Former WWE wrestler Shad Gaspard has likened their gimmick to a version of his former team Cryme Tyme sans the "gangster style" and bling-bling fashion.

They split up on January 31st, 2014, as Titus turned on Young after a tag match, calling Young dead weight. Over a year later, on February 16th, 2015, Titus came to Young's rescue against The Ascension, leading to the two reuniting as a team. In June 2015, the team defeated The New Day to win their first WWE Tag Team Championship. After losing the titles back to The New Day, the team would disband again after Titus was suspended in February 2016. Titus would go on to debut the "Titus Brand," which would later become "Titus Worldwide," while Darren Young was released from his contract in 2017.