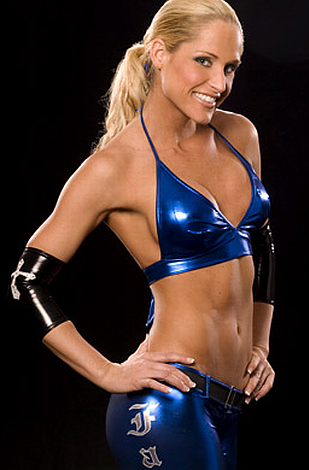 "You're not enough for me...".
Advertisement:

Michelle Leigh Calaway (née McCool, born January 25, 1980) is an American professional wrestler who is best known for her time with WWE, where she performed under her real name as Michelle McCool. She is a former two-time WWE Divas Champion, two-time WWE Women's Champion, and one-half of LayCool.

McCool originally worked as a middle school teacher in Palatka, Florida. She joined WWE in 2004 after participating in the 2004 WWE Diva Search. In her initial on-screen role, she acted primarily as a personal trainer and occasional wrestler. She also acted as the manager to the team of K. C. James and Idol Stevens, collectively known as the Teacher's Pets, in 2006 after changing her on-screen character to that of a teacher. At The Great American Bash in 2008, McCool became the inaugural WWE Divas Champion, holding the title for approximately five months. She then won the WWE Women's Championship at The Bash in 2009, becoming the first female wrestler to have held both titles. At Night of Champions in 2010, she unified both titles becoming the first WWE Unified Divas Champion. McCool has held both titles on two occasions, which makes her a four-time champion overall.