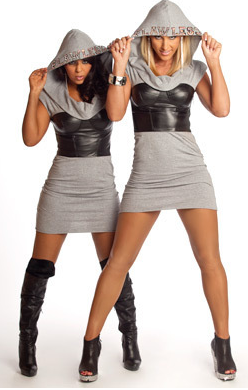 FLAAAWLEEEEESS
Team LayCool (also simply called Lay-Cool) were a tag team in Professional Wrestling that consisted of WWE Divas Michelle McCool and Layla. The two teamed together regularly in standard diva tag matches in 2009 before officially forming an alliance at the end of the year. They were given new characters as exaggerated versions of Alpha Bitch and Valley Girl tropes, feuding with the other divas. As 2010 went on they slowly became more prominent in the WWE, even becoming the first female pros on NXT as well as co-holding the WWE Women's Title

. The majority of their feuds with the other divas were based around their Valley Girl gimmicks ie. with Mickie James they made fun of her weight, with Beth Phoenix they kept calling her a man etc.
Advertisement:

The IWC is pretty divided in their attitude towards the team mainly because Michelle is an easy target for haters due to her marriage with The Undertaker, and outspoken attitude towards her critics, but the duo were very important in building the WWE's women's division up in 2010 when injuries and firings nearly buried it completely.

This team provides examples of: