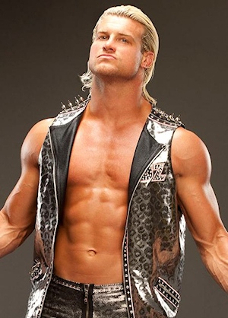 Nicholas Theodore Nemeth (born July 27, 1980 in Cleveland, Ohio), known by his ring name Dolph Ziggler, is a wrestler currently working for WWE. Known best for having a confident in-ring persona, and (to his chagrin) for being the guy that reminds a lot of longtime wrestling fans of a young Curt Hennig, Ric Flair, Billy Gunn, Shawn Michaels, and Edge.

Nick was signed to developmental territory Ohio Valley Wrestling, lasting a year there before making his debut on Raw as the manager (specifically, the caddy) to Chavo Guerrero Jr., who was wrestling as Kerwin White at the time. After that gimmick abruptly ended, he became Nicky from the Spirit Squad, a five-man faction of male cheerleaders, which lasted the better part of 2006 until their feud with DeGeneration X came to an end in the fall.

In September of 2008, he re-introduced himself as Dolph Ziggler (literally - he spent the first few weeks in this persona introducing himself backstage). He's slowly but surely moved up the ranks, including notable feuds with The Great Khali, John Morrison, Zack Ryder and most famously Edge, a feud in which he managed to become World Heavyweight Champion for less than fifteen minutes. Long known for his association (and on-again, off-again romance) with Vickie Guerrero, he was then managed by AJ Lee up to July 2013, at which point he dumped her after she cost him his World Title match against Del Rio. Afterward, he held the blue Money in the Bank briefcase for nine months through 2012 into 2013 (and carried it wherever he went), and with it, an opportunity to cash it in for the World Heavyweight Title—which he successfully did the night after WrestleMania to become a two-time World Heavyweight Champion. He would ultimately drop the title back to Alberto Del Rio two months later, turning face for the first time in his career in the process.

It's too damn bad these tropes are too damn good: