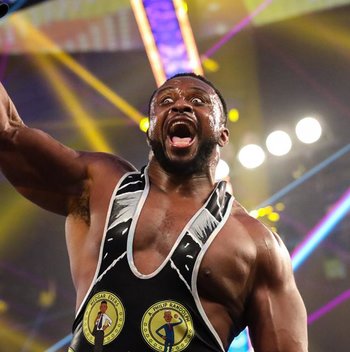 The Powerhouse of Positivity.
Advertisement:

Ettore Ewen (born March 1, 1986) is an American professional wrestler, competing in WWE under the ring name of Big E. Prior to joining WWE, Ewen was a powerlifter, having won many championships and setting records at both state and national levels. Ewen joined WWE in 2009 and adopted the "Big E Langston" moniker. The "Langston" was dropped in February 2014 and now he's just "Big E". He's most known however for his work as a part of The New Day, being the Incoming Ham announcer for their antics, his spacey, boisterous personality, and his impressive feats of strength.

Big E is a one-time WWE champion, a two-time Intercontinental champion, a one-time NXT champion, and the winner of the men's Money in the Bank contract in 2021. He is also an 8-time WWE Tag Team Champion as part of The New Day.