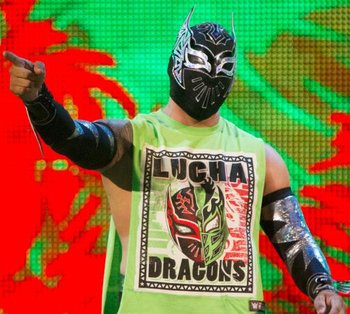 As part of the Lucha Dragons
Advertisement:

Sin Cara is a gimmick used in WWE. He was first portrayed by Místico, and for a period of time by Hunico when Mistico was under suspension, before the two would battle it out on who was the rightful Sin Cara, with Mistico being victorious. Unfortunately due to injuries and other factors, Mistico left WWE in 2014, and Hunico took over the role until being released in turn in 2019.

Tropes associated with Sin Cara include: