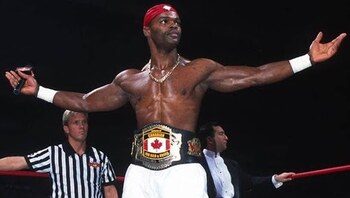 Elix Skipper (born December 15, 1967) is an American Professional Wrestler from Roosevelt, New York who is best known for his work in the final years of WCW as well as his tenure in TNA. A student at the WCW Power Plant, Skipper worked briefly for New Dimension Wrestling in 1998 before debuting in WCW in October 26, 1999 as Skip Over.

note Renamed the 101 Kilograms and Under Championship by Storm. Skipper stayed with the stable until early 2001. He would compete in the the cruiserweight division before teaming up with Kid Romeo and winning the WCW World Cruiserweight Tag Team Titles

As WCW permanently closed its doors in March of 2001 he joined Heartland Wrestling Association, WWE’s then developmental territory for the rest of the year. In 2002, Skipper would join both TNA and All Japan Pro Wrestling. In All Japan, Skipper wrestled mainly in tag teams and was known first as Dark Guerrera and then as Extreme Blade. He left the promotion in mid-2003.

In TNA, Skipper would be part of the company’s X Division, forming the stable Triple X with Low Ki and Christopher Daniels. Skipper would maintain a somewhat consistent relationship with TNA until March of 2008. Skipper would leave the company a four time winner of the NWA World Tag Team Titles

(three times with his Triple X compatriots and once with Chris Harris), and the winner of the 2004 World Cup X with Chris Sabin, Christopher Daniels and Jerry Lynn.

Skipper would have one more match on January 9, 2009 with Tyler Black and then retired from wrestling.