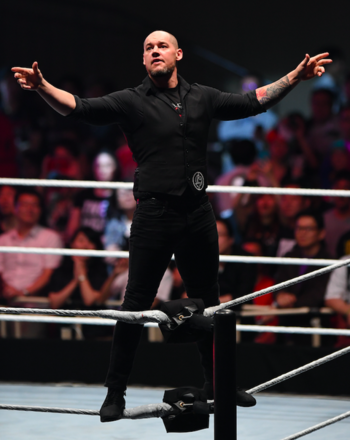 TV Tropes's Favorite Son
"I don't live for anyone other than myself."
Advertisement:

I'll be your end of days.

Thomas Pestock (born September 13, 1984 in Lenexa, Kansas) is an American professional wrestler, retired boxer and football player currently signed to WWE, where he performs under the ring name Happy Corbin.

He was initially a Jobber prior to being repackaged as a Wrestling Monster. At WrestleMania 32, he made his main roster debut at that year's Andre The Giant Memorial Battle Royal and winning it too. Later that year he was drafted to SmackDown Live and in 2017 became Mr. Money in the Bank and won the United States Championship at Hell in a Cell 2017.

In 2018, he was drafted to Raw and after Backlash 2018 became a heel authority, first as "Constable" Baron Corbin, relying Commisioner Stephanie McMahon's orders and opinions to GM Kurt Angle, then (after Angle's "screw-ups" granting him a "vacation") as the "Acting General Manager" all the way up to Survivor Series 2018, then as "General Manager-Elect" on the road to TLC 2018, where he was finally ousted from power.

In 2019, Corbin managed to win the renewed King of the Ring tournament, retitling himself "King Corbin". He held the title for two and a half years until on June 18, 2021, he was forced to drop the "King" title when he lost to Shinsuke Nakamura. After hitting rock bottom upon losing the crown, he hit it big in Vegas during Summerslam weekend and rebranded himself as "Happy Corbin".

Not to be confused with actor Barry Corbin.