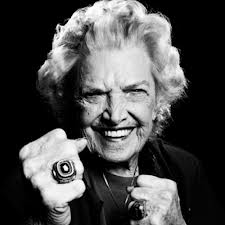 Johnnie Mae Young (March 12, 1923 – January 14, 2014) was an American professional wrestler. An influential pioneer in women's wrestling, she helped increase its popularity during World War II and training many generations of wrestlers. She wrestled throughout the United States and Canada, and won multiple titles in the National Wrestling Alliance.

Beginning in 1999, Young had a high-profile second career in the WWE, being part of a recurring comedic duo with best friend The Fabulous Moolah in appearances on WWE televised events. One of her more infamous moments was when she began a "storyline" where she dated Mark Henry, including an announcement that Young was pregnant. Her "child" was eventually delivered and found to be nothing more than a bloody rubber hand. In a more badass storyline, The Dudley Boys, specifically Bubba Ray Dudley, performed a powerbomb on Young through a table twice in consecutive episodes of Raw - the first being in the ring and the second being off the entryway stage. Young was 77 years of age at the time, but expressed enthusiasm for the stunt. She was inducted into the WWE Hall of Fame in 2008 and in 2017 the WWE held the WWE Mae Young Classic, a special all-woman worldwide invitational tournament, in her honour. A second one was held in 2018.