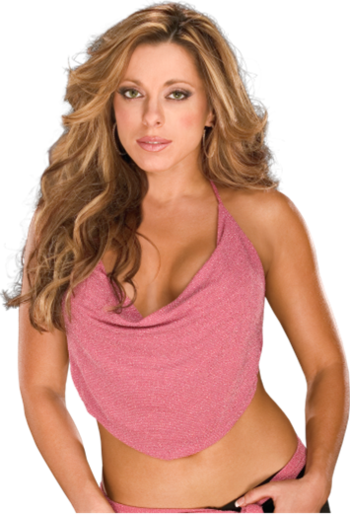 Dawn Marie Psaltis (born November 3, 1970) is an American real estate agent and model turned professional wrestler and valet. She is best known for her appearances with Extreme Championship Wrestling and the SmackDown! brand of World Wrestling Entertainment under her ring name Dawn Marie.

Psaltis began managing wrestlers on the independent circuit, starting with Tony Atlas, before she signed a deal with ECW after what was supposed to be a three-week stint as the manager of Lance Storm, feuding with Chris Candido and his manager, Tammy Lynn Sytch, but Paul Heyman was impressed by the chemistry between Psaltis and Storm that he offered her a contract, which she accepted.

Storm and Psaltis feuded with Candido and Sytch for several months, during which time Psaltis was renamed "Tammy Lynn Bytch" to spite Candido and his manager. After the respective feuds ended, she used the ring name "Dawn Marie Bytch," which was eventually shortened to simply Dawn Marie. After Storm formed a tag team with Justin Credible known as the Impact Players in the summer of 1999, she managed both men, helping them win the ECW World Tag Team Championship on two occasions. Psaltis continued to manage Storm until he left ECW for World Championship Wrestling in May 2000. After Storm departed ECW, Dawn Marie opted to manage Simon Diamond and Johnny Swinger until ECW's bankruptcy in 2001.

Dawn Marie then went back to the independent circuit until WWE signed her, where she made her debut on the SmackDown! brand as Vince McMahon's legal assistant. She debuted with the name "Dawn Marie Rinaldi" although it was quickly shortened to the original "Dawn Marie." Later that year she would begin her most notable feud, involving her marrying Al Wilson, the storyline father of her rival Torrie Wilson. She was released from her WWE contract on July 2005 and returned to the independent circuit. She was inducted into the WSU Hall of Fame in 2010.