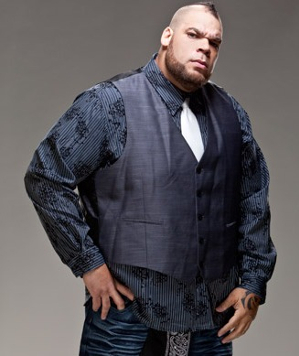 We gon' rip it up!
Advertisement:

Originally, he was featured as a bodyguard for Alberto Del Rio. Due to him filming a movie at the time, he was taken off of TV for a few months and was dropped as Del Rio's bodyguard. He returned and began Squashing various Jobbers on WWE's online-exclusive show WWE Superstars. After nine consecutive squash victories on Superstars, WWE ran vignettes promoting his return to television on the November 7, 2011 episode of Raw. However, Clay's television return was continuously delayed by authority figure John Laurinaitis to be "next week", with this trend continuing all the way into January 2012. Clay made his television return on the January 9, 2012 episode of Raw as a face with a fun-loving, funk dancing gimmick, with the nickname "The Funkasaurus". Then accompanied by the The Funkadactyls Naomi and Cameron and announced as hailing from "Planet Funk", Clay incorporated gyrations and dance moves into his various squash wins on both Raw and SmackDown!.

Brodus Clay did not stop wrestling after being let go by WWE, having been seen in North East Wrestling, the UK's Varsity Pro Wrestling and TNA (where you can call him Tyrus), among other promotions. He has since won the Pennsylvania Premiere Wrestling Heavyweight Championship. He went on The Greg Gutfeld Show as a guest, and eventually became Greg's co-host, and a Fox News contributor.