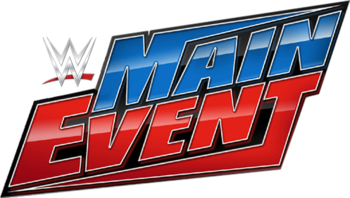 WWE Main Event is a professional wrestling television program produced by WWE that debuted October 3, 2012 on I.O.N), then went to live streaming on the WWE Network, and is now broadcast on Hulu Plus. It features WWE wrestlers, and complements WWE's primary programs, Raw and SmackDown, with 2 exclusive matches and behind-the-scenes content per episode.

Unlike WWE Superstars, WWE Main Event features main event and upper mid-card talent which includes John Cena, CM Punk, Sheamus, The Big Show, Alberto Del Rio, Kane, Daniel Bryan, Randy Orton, Dolph Ziggler, The Miz, and The Shield. However, Main Event has since become, for all intents and purposes, another version of WWE Superstars, both of which feature mid-to-low card wrestlers and Divas (although very recently the show now features mid-to-low card Superstars as well as an occasional match involving the cruiserweights as women's matches have increasingly been featured on RAW and Smackdown as of late).