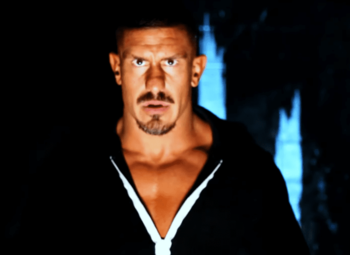 Michael Hutter (born March 18, 1983) is an American professional wrestler. He was signed to TNA under the ring name Ethan Carter III (often shortened to "EC3"), the storyline nephew of TNA President Dixie Carter and a two-time TNA World Heavyweight Champion until January 2018, after which he signed with NXT (albeit, still using the "EC3" name).

Hutter began his professional wrestling career in 2002, and wrestled for several promotions beginning in October 2006. In July 2006, Hutter signed a contract with WWE, where he wrestled as Derrick Bateman. He was assigned to WWE's developmental territories Ohio Valley Wrestling (OVW) and Florida Championship Wrestling (FCW), where he won the FCW Florida Tag Team Championship with Johnny Curtis. During his time with WWE, he competed in the fourth and fifth seasons of WWE NXT under the tutelage of Daniel Bryan. Although he was signed to WWE, Hutter competed in several Independent promotions, winning the AIW Absolute Championship and the Firestorm Pro Heavyweight Championship. In February 2022, he and Adam Scherr (the former Braun Strowman) announced they were establishing the new CYN ("Control Your Narrative") promotion.

Oh yeah, and DO NOT confuse him with the title character of The Vanishing of Ethan Carter.