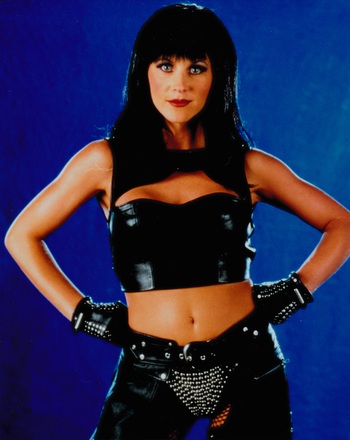 She first appeared on the WWF in August 1999 as Miss Kitty, an assistant to Debra, appointed to her by Jeff Jarrett, whom Debra managed. After Jarrett left the company after losing the Intercontinental Championship to Chyna at No Mercy, Carter began managing Chyna, and then started dressing in Chyna-like clothing and wearing a black wig.

At Armageddon in December 1999, Miss Kitty won the WWF Women's Championship in a Four Corners Evening Gown Pool match that included defeating then-champion Ivory and Jacqueline. After the match, Miss Kitty stripped out of her dress in celebration and quickly flashed the crowd her breasts. This was the first instance of intentional nudity in the WWF. The following evening, she announced, before successfully defending her title in a Chocolate Pudding match, that she was changing her name to The Kat. The Kat lost the championship on the January 31 edition of Raw to Hervina in a Lumberjill Snowbunny match, only to be revealed later that Hervina was Harvey Wippleman in drag.

After having spent the rest of 2000 in a feud with Terri Runnels, in early 2001 The Kat began a new storyline with the stable Right to Censor, a group of conservative wrestlers, where she demanded equal time for the "right for nudity". At No Way Out (WWE), Jerry Lawler, who was representing The Kat, lost a match to Steven Richards, the head of the stable, and as a result she was forced to join the stable. On February 27, 2001, however, Carter was released from the WWF in the middle of the storyline. As a result, her husband Jerry Lawler also quit the company, but after they divorced shortly after leaving the company, Lawler returned the night after Survivor Series in November.